The phenomenal musical group from Mexico, GRUPO FIRME, makes musical history at the world’s most famous music festival, Coachella, performing live to 70,000 fans with some of their hits “Ya Superame,” “El Amor No Fue Para Mi,” “El Roto,” among others.

Grupo Firme is one of the only two Mexican groups on this year’s lineup, and one of two bands who performed on the mainstage of the festival. In addition to their incredible production and dancers, they welcomed special guest Becky G who waved the Mexican flag high above the festival.

The group has also just received the coveted key to the city of Coachella by the mayor Steven Hernandez.

Grupo Firme recently announced their first stadium tour which will kick off later this year. The “ENFIESTADOS Y AMANECIDOS” tour will be a celebration of Mexican culture and music, featuring banda, norteño and mariachi tracks, complete with folkloric dancers. The regional Mexican phenomenon is also making history by being the first Mexican band to sell out stadiums including their first stop at the iconic SoFi Stadium in Los Ángeles on May 28.

With 11.6 million monthly listeners on Spotify, 6 million subscribers on YouTube, 4.4 million followers on Instagram, Grupo Firme has been taking the music scene by storm. Their videos have amassed millions of views over the last three years and their hit «Ya Superame» has reached over 235 million views in just 8 months. 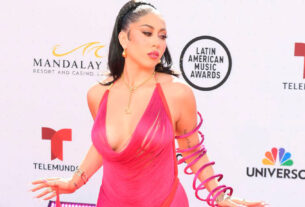 Bad Bunny Replaces Himself at No. 1 on Hot Latin Songs Chart as ‘Titi Me Pregunto’ Bumps ‘Me Porto Bonito’